It's been a bit since my last post and since then I've done quite a few things.

First of all, according sprites I finished everything of the female youth and male baby except the head. Head editing takes up so much time :(

Second, I finished the plant! With much help from the creature caves forum I finally did it.
Some pictures will follow soon :)

I think it might need some tweaking though. It's really hard to keep their population going at the moment.

The next thing I'm working on is some firefly bugs. Since this project is all about light and the plant agent needs insects to make fruits they seem like a perfect thing to do.
Right now the 'vendor' (a glass) is finished, they can move around in random directions and die of age or energyloss. Reproduction is on its way next :) And maybe a more goal orientated move pattern.

And for the last I made huge progress with the genetics.
The shiny norns now come with an extra organ. The Photophor!


It contains an extra tail appearance (would have moved the original one but for the sake of not having hybrids without one there are two now..), some additional instincts (carrying around bad fruits? Play with plants? Sounds like fun!) and the new 'mystery chemical' 214: Luciferin.
It increases with hunger and sexdrive and decreases with stress. And yes, with a special agent I made  them emit light!
They glooooooooooooow now :)
Also, they live a bit longer than usual norns and get to youth at about an hour. They have longer pregnancies and a slight resistance to belladonna.

The only thing I still have to fix is something about their constant homesickness..
Posted by Luzze at 10:29 AM No comments:

The head took a bit longer since I didn't only add the stars but also the red glow and had to make it not look evil.. well, except for the angry face ;)

The rest of the body was done in a few hours then!

I also made first changes to the genome.. so say hello to Anas new friend: Genera!

I tried to make the stars look more like stars and think I suceeded. The tail - star was intended to be red but I forgot to recolor it. Green looks nice, too!

Right now I'm working on the baby female. I already finished the body using the same technique as for the adult body.. but a bit simplified. It has a bit more 'glow' in total now.

The head ist about to be finished.. All files with eyes closed are ready and with some experience it's done much quicker. The ones with eyes open still need all the eyes to get masked out but will be finished quickly after I did so.

Looking at the old baby I realised what was special about them was also these glowing eyes.. I'm thinking about giving them some sort of eye-glow now, too. Tried it with red today and made them look like demons *laughs*

Besides the spriting I'm trying myself on coding an agent that will go with them. It's a kind of star flower that will only grow in the dark but flower in light - so if I manage to make the Shiny Bengals emit the Light CA the flowers will only produce seeds when they are near, giving them a sort of exclusive food resource.
I already finished the seed vendor and the seeds, all working just fine. I have some sprites for the flower, too but none for the plant or fruit.
The fruit won't be the problem but I'm troubling with creating plantsprites that fit into the game. Unfortunally I have totaly no experience with 3D Modelling :(

(The flowers.. or maybe fruits.)

What came to my mind today was using the unused 'hair' appearance gene also somehow, giving some Norns hair, horns or maybe an halo? :D It seems to be possible.
Posted by Luzze at 3:11 PM No comments:

Trying to inject the sprites to the game was hell.

After discovering that the 'Nornpose' programm for C3/DS (it's called differently I know :P) won't work on my PC the only thing left was to look at the results in the game itself.

Luckily I had the bodydata ready from the old files (yey!) and just copied the old breed into my files, overwriting it with the new adult female.

Aging up a sweet Norn called Ana.. gamecrash. Oh no.

So I took them out and put them in one by one. Every single one of the sprites had green spew - but thats solveable.

I found out it was the head file that caused the crashes.. and after hours and HOURS of trying to find the error, recompiling, trying almost everything possible I found out it was just some picture in the file that didn't have a true black background ....

At least it's working now. 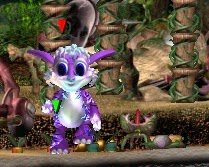 While the spriteproblem yesterday gave me a big headache I thought a bit about the genetics I'll give to them.
The last time they didn't have something special, just the normal expressive CL genome.
But what about making them linked to light somehow? Like changing everything that has to do with 'Norn Home' to 'Light' (as they are both smells)?
Or make an agent that make them emit Light instead or besides Nornsmell? Though I don't know if that would have any effect ingame...

Next up: The Baby Female!
Posted by Luzze at 7:43 AM No comments:

The Tail and all the rest

The thing I liked most about my new breed back then was the tail:

A star as the tip. Looked good in combination with almost every other breed!

But they were floating above the base uglily.. So I was about to change that.

I found the old star sprite I used in 2002 in the C3 folder (finally!) and positioned it to where the tip connects. I hope this will fix the issue.
I also added some variety in the posing. I wonder what this will look like.

The Tailbase was simple: coloring it purple.. wait.
I took a look at the old sprites and realised that it is yellow. Oh well. Back to coloring, but easily done.

The Arms and Legs were simple now:

Coloring, inserting a star.. (again a new one, one could think I would learn from my mistakes but no..) positioning it and done.

Now I remember something about a program called Nornpose to look at what I created.. I wonder if it still exists.. so:


Next step: Finding Nornpose or inserting the first Sprites ingame!
Posted by Luzze at 12:16 PM No comments:

I wanted to do it a bit different then the rest of the Norn, another color technique, making it look really shiny!

I tried many things, many filters and finally found a much to
complicate way to archive something I liked..
I inverted the color, cut out the black (now white) stripes (very difficult!) set them to some transparency, made a new layer out of the selection and colored it blue, setting some layer properties and so on.. and finally got:

I hope it will look glittering as the Norns will move their bodies. Actually the body turned out a little bit too lilac. I wanted it to be more blue. But I only realise this as I write this text :P
Maybe I'll change it when the rest is finished...
Posted by Luzze at 12:10 PM No comments:

The Head is the most complicated and biggest file in the process.

What I still knew from making breeds in the past was: Take care of the black! Every Pixel different than 0/0/0 will be shown.

I opened Photoshop again and thought about the fasted, safest and best way to apply the changes.
I created actions to coordinate the process.

The first action seperated the black background as a layer - keeping it safe - and saved the files as a .psd

The third one inserted the star (a new one ..)

The fourth adjusted the size of the star - they differ now fron forehead to back.

Then came the actual work: placing the star at the right spot in the face, masking out the eyes in those pictures where they are open and give them their own color, getting pieces of the star out of the eyes and so on.. for many many pictures.

Then I realised that a dark blue mouth (when opened) doesn't look very good. I went back to all finished pictures and colored it over red.. it doesn't look like the original now, but at least it's not dark blue.

Finally I got them done..

The star in the face doesn't look as good as the one in the concept.. but like I said I forgot to save the pictured :(

"Re-compiling" the pictures into the c16 I found I made a funny mistake.. the bmp format photoshop saved my work was different from the ones the sprite builder uses. The colors were all mixed up.
There was a little button saying something about inverting an order.. after checking it it all worked well :)